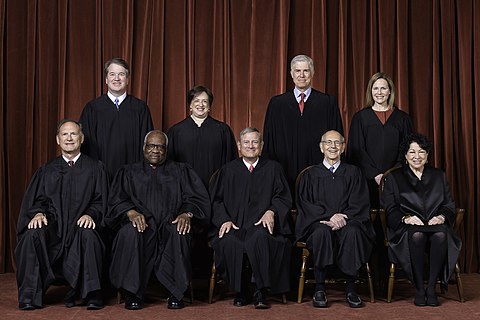 5 Supreme Court Victories that are Having Huge Impacts for the Better.

These 5 court victories are historic and the socialist/secularist heads are spinning.

The First Amendment gives every American the right to pray and worship without any infringement from the government. However, because the radical socialists likes to pervert the language in the Constitution, and twist meanings, they have used the Separation of Church and State language to ban religion in public spaces and government buildings and institutions.

However, religion scored a victory recently with the Supreme Court’s ruling that a Washington school district could not fire a high school football coach for praying on the field.

First Liberty President, CEO, and Chief Counsel Kelly Shackleford stated, “Our Constitution protects the right of every American to engage in private religious expression, including praying in public, without fear of getting fired. We are grateful that the Supreme Court recognized what the Constitution and law have always said, Americans are free to live out their faith in public.”

Justice Neil Gorsuch wrote in the Court’s opinion, “Here, a government entity sought to punish an individual for engaging in a brief, quiet, personal religious observance doubly protected by the Free Exercise and Free Speech Clauses of the First Amendment. And the only meaningful justification the government offered for its reprisal rested on a mistaken view that it had a duty to ferret out and suppress.”

“Religious observances even as it allows comparable secular speech. The Constitution neither mandates nor tolerates that kind of discrimination. That the First Amendment doubly protects religious speech is no accident. It is a natural outgrowth of the framers’ distrust of government attempts to regulate religion and suppress dissent.”

The First Amendment states that “Congress shall make no law respecting an establishment of religion nor prohibiting the free exercise thereof”. Which means that the government can’t create a government run religion or take over an existing religion. It also means that a religious body can’t have the power and control to govern.

It has nothing to do with praying in school or displaying the Ten Commandments in a courthouse — Both of which are permissible under the First Amendment. It has everything to do with the left’s obsession to erase God and replace him with the Government.

The Second Amendment is very clear — “A well-regulated Militia, being necessary to the security of a free State, the right of the people to keep and bear Arms, shall not be infringed.”

The Supreme Court’s recent decision reaffirmed that individuals have a right to carry and use arms for self-defense, which cannot be denied by the state.

This of course is good news to anyone who lives in a blue state that couldn’t get a handgun for protection from the out-of-control crimewave that plagues, not only New York City, but the entire country.

In his 1803 book, Blackstone’s Commentaries, U.S. District Court Judge George Tucker wrote, “In addition to checking federal power, the Second Amendment also provided state governments with the ability for the states to thwart and oppose the general government, and it enshrined the ancient Roman constitutional principle of civil and military virtue by making every citizen a soldier and every soldier a citizen.”

Yet despite these rulings, the left continues to wage a war against law abiding citizens protecting themselves. A recent bill passed by both houses, puts further restrictions on gun ownership, and Blue State gun laws still make it difficult for citizens to get a gun license.

The Decision opens the right to carry a firearm in other blue states that have strict carry laws like New York — which is infuriating the left.

At least this recent ruling is one step closer to giving some protection to law-abiding citizens who want to buy a gun.

The Supreme Court made a historic, lifesaving decision for children.

They overturned the famous Roe vs Wade decision of 1973 that nationalized and legalized abortion.

I never thought in my lifetime it would be overturned. I’m rejoicing. It’s an answer to a prayer.

The decision to overturn Roe vs Wade was never in contention — most Democrats and Republicans agreed that the original ruling was bad precedent. Even noted left-wing Supreme Court Judge Ruth Bader Ginsburg said the original ruling was a bad ruling and should probably be overturned. Of course, she made those statements knowing that it would most likely never be overturned.

The radicals are rioting and protesting and are labeling the strict constitutionalist justices as “threats to democracy”, and that the Court’s ruling should be ignored.

The facts are clear. The Supreme Court didn’t make abortions illegal. They don’t have the power to make laws, only judge on whether an existing law is constitutional, and there’s nothing in the Constitution that guarantees that abortion is a “right”.

By pulling the Federal government out of the “abortion business”, the issue regarding abortions was handed back to the states. Now the people of each state get to decide on the abortion issue based on how it fits in their community and how it reflects their local standards and values.

The new battle now is in the states… With the people voting — Not unelected judges.

Let’s rejoice over these three great decisions and remember to keep reversing statism, socialism, and erosion of our rights. It’s the judges that are crucial.

That means that on the federal level, electing a congress, and a president that oppose collectivism and stand for freedom.

On a state and local level, electing judges, legislators, and governors that will be for strict constructionists, not judicial activists

Religious Freedom was at issue when the Supreme Court heard a case disputing a Maine Law which prohibited parents from using state funded tuition vouchers to send their kids to religious private schools.

The Court found that Maine had violated the Free Exercise Clause in the First Amendment, when it excluded religious observers from otherwise available public benefits, and the state can’t discriminate against a private school because it is religious or run by a religious organization.

The Free Exercise Clause in the First Amendment states:

“Congress shall make no law respecting an establishment of religion or prohibiting the free exercise thereof; or abridging the freedom of speech, or of the press; or the right of the people peaceably to assemble, and to petition the Government for a redress of grievances.

Put in simpler terms, it protects our right to practice our religion as we see fit, without government infringement or exclusion.

The ruling opens the doors to all Americans of faith to be able to choose the best schools for their children without fearing government punishment or reprisal for their faith.

Of course, liberal justices Stephen Breyer and Sonia Sotomayor dissented with the majority, decrying that they have lost three similar cases involving religious liberty, regarding states withholding funding to religious schools and only giving funds/tuition to government run schools.

This incredible victory now opens the door to Christian schools and homeschooling getting tax credits or vouchers—A major step towards school choice.

Court Victory #5:  Amazing Action Against the Deep State Bureaucracy and its Regulatory Expanses

They put the brakes on Biden’s out-of-control bureaucracy.

They said “no” to the Deep State… And the bureaucracy is angry.

The Supreme Court decided in a 6-3 ruling, that the EPA does not have legal authority to legislate out of the bureaucracy—A halt to their making up policy by socialist bureaucrats.

Chief Justice Roberts wrote, “It is not plausible that Congress gave EPA the authority to adopt on it’s such a regulatory scheme. A decision of such magnitude and consequence rests with Congress itself, or an agency acting pursuant to a clear delegation from that representative body.”

The EPA argued to the court that they did have the authority to regulate power plant emissions because Congress has not acted to expand its [EPA’s] authority legislatively. The Court did not agree.

It’s up to Congress to pass legislation and for the President to sign it.

And that’s what the Supreme Court Ruled.

The major setback to the Administrative State is incredible.

It’s a complete defeat for the Deep State and the expansion of the Federal Government under the Biden Administration.

Biden has been using the bureaucracy to achieve its political and economic goals of moving America into a socialist country.

It completely pits the bureaucracy at war with the Supreme Court’s ruling.

The bureaucracy is so upset that for the first time in history, the Department of Justice condemned the U.S. Supreme Court ruling.

But the Supreme Court’s will have a profound, powerful impact in stopping the fast-paced march to socialism and reverse the regulations and initiatives that were transforming America into a collectivist society. 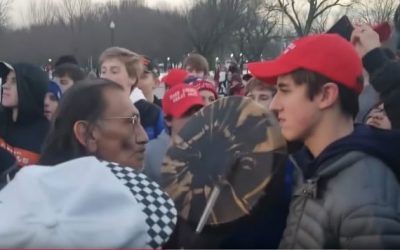 Note: We do not take money from any candidate for their endorsement. For over 20 years – we never have.